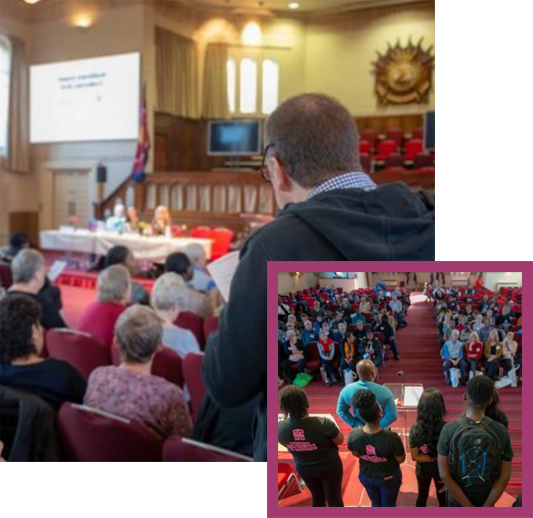 A Charity With Mission...

WE SERVE THE COMMUNITY

Southwark Group of Tenants Organisation (SGTO) is an
independent voluntary organisation representing and promoting the rights of tenants and residents groups in Southwark. SGTO is a charitable limited company. We registered as a charity in June 2009, our Charity registration number is 1130043 and our Company registration number is 6406353. Southwark Group Tenants Organisations (SGTO) is a user-led charity that supports Tenants & Residents Associations across Southwark borough with housing and community issues. As a charity our mission is laid out in our charitable objectives to “Promote the benefit of the inhabitants of Southwark by associating together local authorities, voluntary organisations and residents in a common effort to improve the life of the inhabitants.

Bells Gardens Community Centre has been the home of SGTO since 1990, located in the heart of Peckham at 19 Buller Close, London SE15 6UJ. Tel: 020 7639 6718. The building is owned by the London Borough of Southwark (LBS) and the SGTO manages the building on their behalf. It was previously managed by three Tenants and Residents Associations: Lindley, Oliver Goldsmith and Bells Gardens TRAs. The building is segmented in two, with SGTO on one side and Launch It, on the other. The building is well used and prized by all the community regardless of age ethnicity etc. 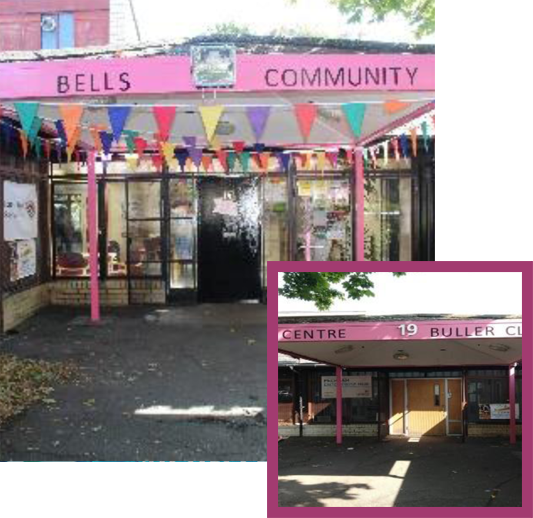 The SGTO engages in partnerships to improve opportunities or the standard of living for local people than individual TRAs can ever achieve alone. We are now working with a larger group who are not necessarily involved in tenants’ associations or made up of tenants of Southwark, in dealing with specific issues since the COVID19 pandemic, to provide support to anyone that needs it.

SGTO is a democratic member led organisation with all members having a vote at the AGM to elect their Board of Trustees/Directors. The membership is known as the Group and the Group is made up of all the tenants and residents associations in the borough of Southwark. SGTO is affiliated with over 100 Tenants & Residents Associations, representing tens of thousands of households and many of the most vulnerable communities in Southwark.

What are Tenants and Residents Associations TR&As? These are groups of people from an area, estate or block who have come together to raise issues that they feel strongly about and want action to be taken. Issues could be council policies, repairs, housing management or other improvements and more. It is more difficult to put forward individual views across to the council, but when people come together and form an association, they can have a stronger voice. TR&As are the main ways that Southwark Council consult with its members on certain changes or practices. The Council provides recognised TRAs with a constitution, grants, training, and community development support. See the TR&A map on Homepage for a Tenant Association near you.

Staff members are responsible for the service delivery of the organisation. They are few, but they carry out enormous task in different capacities to ensure our tenants and residents are provided with the much needed services. This is in line with the Key Performance Indicators as set out in the funding conditions by the local authority. All staff are required to undertake regular training and engage with new and existing Tenants and Residents Associations in the borough. The Senior Manager ensures that reports and/or emerging issues are presented to the Board monthly.

Members of the Board are actively involved in their local Tenants and Residents Associations, bringing a wealth of community knowledge, skills, and experience. The board members play a strategic role in managing the organisation. All prospective Board members are required to complete a trustee disqualification form at the time of their nomination. 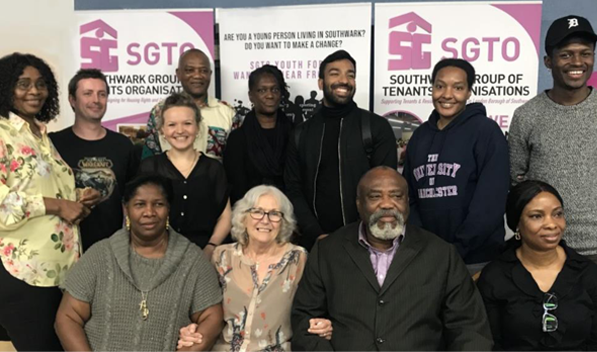 The Board members have annual training on their roles and responsibilities as charity trustees together with any legal requirement updates. The Board members are reminded that their decisions are collective and individual members, when representing the Organisation, should be careful to reflect the views of SGTO and not their own personal views.

Through the years, SGTO has been involved in supporting and building new and existing links with voluntary groups and campaigning with tenants / residents for better housing
conditions, tenants’ rights, and tenants’ involvement in decision-making.
In the past year, SGTO has undergone enormous changes in structure to ensure that SGTO is now strategically positioned to achieve these aims, promote safer neighbourhoods, and embrace the ethnic and cultural diversities that enhance our communities. Our organisation is constantly evolving to respond to the needs of the residents of Southwark. We believe we have a critical role to play in supporting and empowering
residents to have a voice in improving their quality of life and meeting their housing needs and bringing the voices of our community to the attention of the London Borough of Southwark.

We are fortunate that both the Board and our staff have a wealth of experience across the sectors to help us succeed and stay true to our mission and plans. It is a very difficult time for the sector with charities and local authorities facing major cuts in funding which may
lead to a sharp decline in the provision of services for the public.
However, we believe we are stronger when we work together on the issues that matter to us all and we look forward to continuously working with residents, members, and stakeholders to achieve our goals. The future of SGTO is reliant on its commitment to safeguard tenants’ rights, for new and existing residents of Southwark and for future generations. SGTO is also strategically positioned to encourage safer communities and ethnic and cultural diversity amongst its membership.

It is worth noting that the term ‘tenant’ represents both Southwark Council tenants, homeowners, and Tenant Management Organisations, who pay service charges to
Southwark Council.

The SGTO vision is to actively engage and work cooperatively with our members and partners with the aim to increase participation and improve the quality of life in our local communities. Our values and beliefs of active listening, respect and valuing others has been the drive to meeting our vision.

The worth of SGTO as a borough wide group is that it can demonstrate the issues affecting the whole of the borough, link people up and share experience. All the work we do is to improve housing and the lives of local tenants and residents. Through raising awareness of the issues facing residents, SGTO connects people and brings about change. We provide regular campaign updates and policy change information to our members. We give 7 members the information they need to have a voice and the opportunity to feed into consultations and shape our responses.

In 2019/20 our challenge has been Southwark Council’s Resident Involvement Review which led to a yearlong campaign and we held public meetings, protests, circulated open letters and motions as the council attempts to change democratic structures which could have impacted on existing tenant voice structures.

Right to Buy and Bedroom Tax are some of the more recent things we have fiercely campaigned on alongside the council. However, sometimes our work means we campaign against what the council intends to do as our membership sees fit.

In February 2020, a tenant attending our monthly group meeting, raised serious issues over their heating and hot water as they have not had a consistent district heating service since 2016.The following day the landlord provided a follow up for the first time and work started on the pipework to fix the problem.

We have supported a leaseholder who was taking legal action against his landlord for charging for a service that had not worked since 2016 by accompanying them to meetings, taking notes, ensuring the leaseholder received appropriate legal advice and creating a logbook so people on the estate can log outages. This can be used in any legal case, as a campaign tool and as a tool for people to record who they spoke to and when. This approach can now be replicated across other estates experiencing outages.

Our work with Fuel Poverty Action saw central government release further funds for cladding removal to local authorities because of our evidence in parliament.

We have been working closely with Tower Block UK in launching the Fire Safety Survey and we are a key partner in making tower blocks safer.

The SGTO has been contributing in several ways to alleviate the impact of the current pandemic, especially on the older adult and the vulnerable residents in our communities. Winter is often the hardest time of the year and Christmas this year has been particularly difficult for most people.

In December 2020, the SGTO partnered with the London borough of Southwark and United ST Saviour to run a “connected at Christmas Campaign”. They provided a total of £10,000 for the SGTO to allocate amongst our TRAs network which was very much appreciated. This was aimed at supporting the more vulnerable residents in our community particularly those living alone, to feel cared for and connected with at Christmas